My Personal Story and the History, Significance, and Biblical Basis for Women's Head Coverings in Church 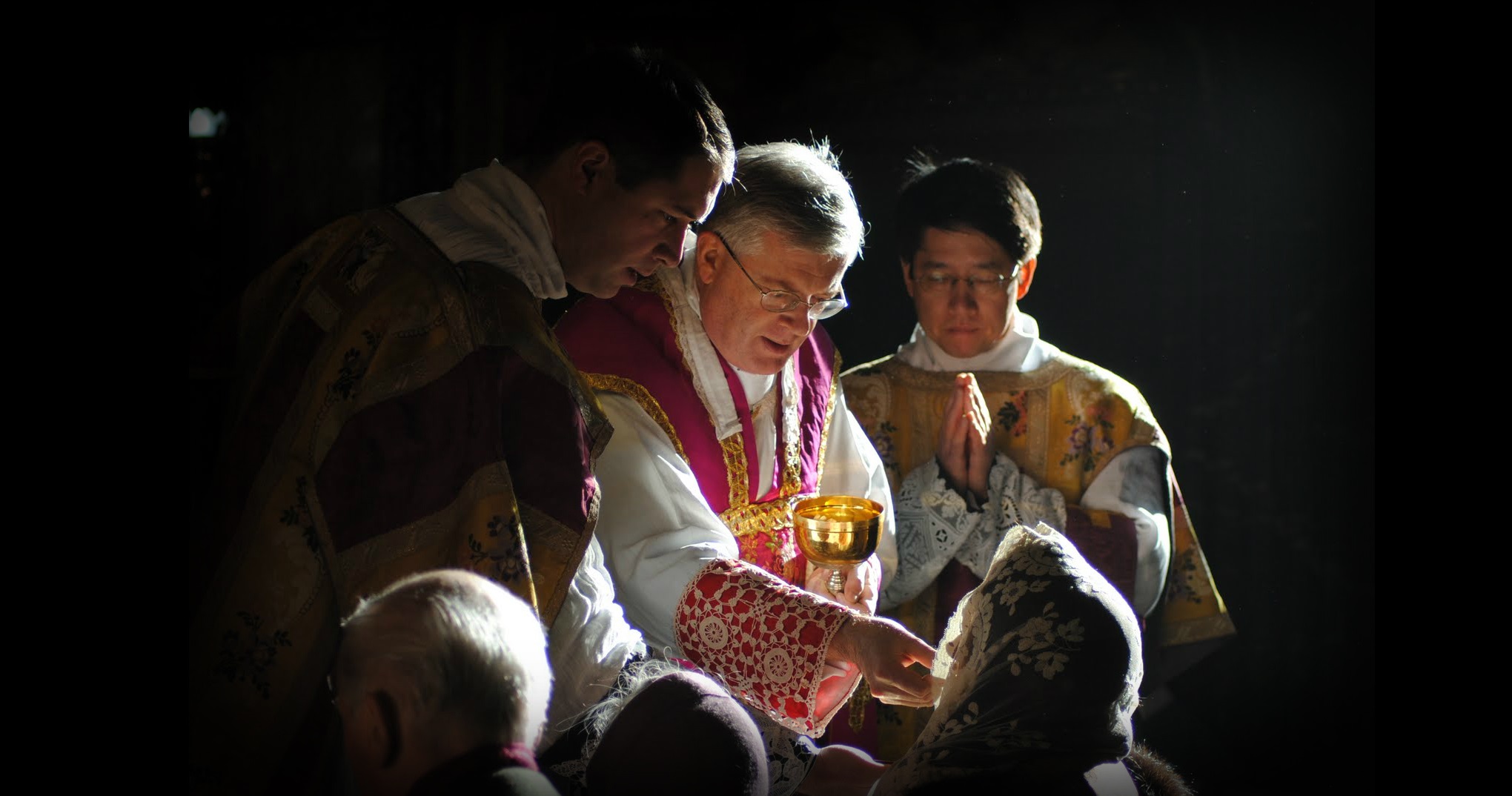 Wearing a veil at Mass is a beautiful devotion that has the potential to edify the entire Body of Christ. It is a biblical way of making more visible the reality and awesomeness of His Real Presence in the Eucharist, of reminding all the faithful of the nuptial nature of the love of God for his people and, in particular, of affirming to women like me - whom the devil likes to attack with a lack of self-worth - that we are beloved daughters of God called to trust in His goodness.

My journey to wearing a veil began in 2010 as I read a discussion thread about this very topic among several good friends of mine. For months, I had been attending daily Mass and was finding myself quickly falling head over heels in love the same Eucharistic Lord I had nonchalantly received hundreds of times since my First Holy Communion in 1995.

When my friend Elaine mentioned why she veiled, she noted that the Church is rich in symbolism. She said, “The Church veils holy things—the tabernacle is veiled, behind the veil is the Body of Christ, and I am a vessel of life. A living tabernacle.”

This veiling of sacred things speaks to a kind of hiddenness that doesn’t seek to conceal in the negative sense, but rather draw us into the depths of mystery, allowing for the mysterious to unfold. In the Old Testament, Moses veiled his face. The Holy of Holies was veiled. Brides are often veiled before the “veil is lifted.” Even Jesus, the infinite God whose glory is revealed in heaven, is “veiled” before us by the appearance of bread and wine. As a wonderful priest puts it, “Like the effect of the virtue of modesty, by the very fact that something is hidden, it is allowed to become that which it is: mysterious and beautiful.”

Elaine also mentioned that veiling represents the desire to humble oneself before God: “When a man walks into church he removes his hat as an act of humility. Men show their bald spots and all of that in this act. When a woman covers her hair, her glory, she is similarly humbling herself before God.”

My heart heard that. I was absolutely in love and in awe with the amazing reality of the Eucharist and Christ’s perfect act of self-giving—He, the God of the universe, wanted to be in such intimate union with me, yes, ME! that He wanted to physically enter into the very depths of my being and consume me with His love! And I just wanted to be His.

I admit, I also wanted to really feel like the beloved daughter of God I’d been told so many times I was. Up until a few months prior, I had never really believed it. I understood that God loves us…“us in general,” but not necessarily me in particular. After all, I had heard so many times from my loved ones how I had failed to be what they wanted me to be (most notoriously, thin and perfectly in control of my emotions), that I figured I was nothing special. I was nothing for someone else to die for, let alone God himself. So as I discovered the intimacy of the love of God, I longed to feel just how precious I was in His eyes, in spite of my sins and imperfections.

The first time I wore my veil before the Lord, I recalled Elaine’s words. “I am a living tabernacle.” In my heart, my longing to be His, wholly and completely, felt like fire. It reminded me of the fire I could see emanating from the Sacred Heart of Jesus. I was that beloved daughter of God, and I just wanted to be His.

Now, before I enter the sacred space that houses the Blessed Sacrament, I pause. I remind myself that the mystery I am about to enter transcends time. I carefully slip my veil on over my head, ready to enter and longing ever so intensely to allow Christ to marry me in the Eucharist. I am His bride.

History and Theological Significance of the Chapel Veil

In Ephesians 5:25, St. Paul writes, "Husbands, love your wives as Christ loves the Church." When read in conjunction with 1 Corinthians 11:7 and following, this reveals the same nuptial imagery for the love between God and His people as that seen in the Song of Songs: man is to Christ as woman is to the Church. Since the Church is the "Bride" of Christ, it makes sense that the bride should cover her head "as a sign of authority" (1 Cor 11:10) (1) and submission to the bridegroom, Christ, whom men represent. Thus, as a Catholic priest puts it, "the veil is meant to be a visible reminder of the perfect submission of the Church to the loving rule of Christ."

For 2000 years, this beautiful practice has focused on the transcendence of the place - the church, the very dwelling of the Real Presence of Christ in the Eucharist. Having been given this magnificent gift by Jesus himself, every Catholic church holds something not found anywhere else: the true, living presence of our Bridegroom, hidden under the appearance of bread and wine.

The Church saw a change in the 1950s and 1960s with the sexual revolution. Radical feminists encouraged women to stop wearing their veils, which they thought were a sign of subjugation. Then, at a news conference in May of 1969, a Vatican official's statement was misunderstood to mean that women were no longer required to cover their head in church.

An article in The Atlanta Journal of June 21, 1969, titled “Women Required to Cover Head, Vatican Insists,” attempted to clarify the situation:

A Vatican official says there has been no change, as reported, in the Roman Catholic rule that women cover their head in church. The Rev. Annibale Bugnini, secretary of the New Congregation for Divine Worship, said the reports stemmed from a misunderstanding of a statement he made at a news conference in May. Bugnini stated: "The rule has not been changed. It is a matter of general discipline."

Despite the clarification and the fact that the requirement still existed in Canon Law, the misinformation spread and women all around the world were told that they were no longer required to cover. Most people assumed that it was the Second Vatican Council that changed the requirement, even though it was not so.

As a result of the widespread disregard of the original requirement for women to wear a head covering in church, it was eventually omitted from 1983 Code of Canon Law, currently in force. Cardinal Burke, then-Prefect of the Supreme Apostolic Signatura, stated in a private letter:

For this reason, it is of the utmost importance for all to recognize that every woman has complete freedom whether to veil in church or not. It is no longer required by the Church, so no woman should feel that she is somehow less than anyone else because she does not veil. Likewise, women who do veil should not be judged as "holier-than-thou" because of it. God is pleased by the intention of our hearts.

If you are thinking about beginning this beautiful devotion, remember that it is God before whom you wish to humble yourself. Like a religious habit, your veil is a public proclamation of your desire to submit to the will of God for your life and to answer the universal call to holiness and continual conversion. Your veil is also a sign of the great dignity that is due to a woman, who has the potential to receive life within herself… both human life and the supernatural life of God. This is an important message the world needs to hear, now more than ever.

Above all, wear your veil with the right intention... for the greater glory of God.

Lily is a full-time mother of six with a special love for the Blessed Sacrament. Looking to promote a deeper reverence to the Blessed Sacrament, Lily founded Veils by Lily in August of 2010. She employs 14 Catholic and non-Catholic women who help provide for themselves and their families by making handmade veils, checking veils for quality, shipping orders, providing customer service, and otherwise providing day-to-day support at Veils by Lily in Imperial, Missouri.

Related: Jesus Swept Me Off My Feet

1. The idea that St. Paul's teaching is to be read solely within the cultural context of the time has been refuted by John Salza, J.D. in an article titled "Women's Head Coverings" which appeared in the August 2016 edition of Catholic Family News. In his endnotes, Salza makes four important points supporting his position. Salza writes:

1. St. Paul emphasizes the head covering's symbol of man's authority over the woman through his precise use of language. St. Paul refers to the "cover" over the women's head, not as a chapel veil or mantilla, but as a "power" or "authority" (Greek, exousian). This is why the veil is placed "over" her head.

2. St. Paul's teaching on head coverings for women in 1 Corinthians 11:1-16 is bracketed by his teaching on the Holy Eucharist (1 Cor 10:16-21 and 1 Cor. 11:23-30) which he declares to "have received of the Lord" (1 Cor 11:23). Because both teachings (head coverings and the Eucharist) relate to the liturgy further underscores that the head covering requirement, like the instructions on the Eucharist, are divine commands from God that must be perpetually maintained.

4. God reveals throughout scripture that wives must submit to their husbands' authority (Eph 5:22-24); Col 3:18; Ti 2:4-5; 1 Pet 3:1,5-6). This was part of God's plan from the beginning. Rebutting the claim of the Modernists, Adam's headship over Eve was not a punishment for Eve's sin, for Adam already had authority over Eve before the Original Sin (Gen. 2:18). Rather, the consequence for the Original Sin was Eve's unnatural and disordered to rule over Adam instead of being submissive to him. As a consequence of her sin, God revealed to Eve in Gen 3:16: "your desire will be to rule over your husband, but he shall rule over you." This means a woman's desire to have authority over men as teachers, lectors, lay ministers, and the like, is a sinful desire, borne from the Original Sin.

5. In 1 Cor 11:10, St. Paul adds that the woman should wear a covering not only for the sake of the man, but also "because of the angels." This fact also reveals the head covering requirement is a divine command and a spiritual duty which transcends cultural or scietal factors. This also puts the head covering practice in the context of the Holy Mass, where the angels witness the eternal sacrifice (cf. Heb 12:22; 1 Pet 1:12; 1 Cor 4:9).

It is my own opinion that modern scripture scholars have attempted to make sense of this teaching - which is at odds with today's cultural practice born out of disobedience - not by careful exegesis but by seeking to confirm their views. This confirmation bias has led them to conclude that, because head coverings for women are not the current practice of the church, the only possible explanation must be that St. Paul's teaching is to be read strictly within the cultural context of his time.