The Real Presence: Overflowing With Love 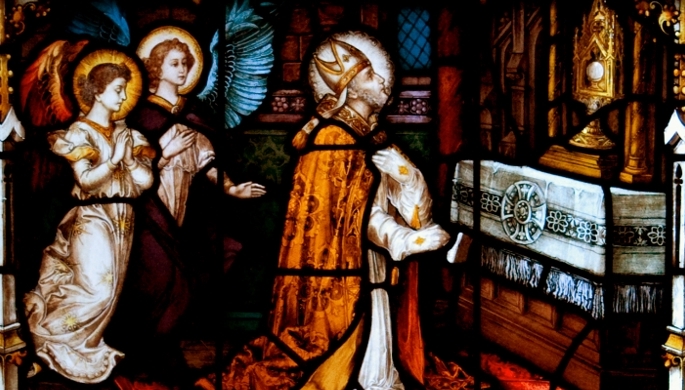 The Eucharist. The body, blood, soul, and divinity of my Savior. The Blessed Sacrament.  A mystery that was once so foreign to me now consumes me with joy and peace every time I receive it, hear about it, or read about it. Receiving communion is no longer a mere symbol of the Lord’s sacrifice for me but it is the most perfect form of love and nothing will ever be more precious to me.

Coming home to the true Church this past Easter has changed my life. In the past when I was in front of the Blessed Sacrament in Adoration I had no idea what was going on. Being non-Catholic the only thoughts running through my mind were that there was too much incense in the room and “Why is everyone looking at this gold thing (monstrance)?”  I had no idea that I was in front of the Real Presence of Christ. Although I wasn’t Catholic I had attended a number of retreats and Steubenville conferences over the years thanks to my wonderful, devout aunt who helped organize most of the events. I had always found Catholicism beautiful because of the history of the Church. There was something so special about it that I couldn’t put my finger on. It was much different from “the norm” of my Apostolic Pentecostal upbringing.

Two years ago I went on an Awakening retreat with the Catholic Student Union at my university. At this time in my life I was heavily involved at the Pentecostal church I was attending. I was a Sunday School teacher, a music minister, I was on the sign team, helped with fundraisers, the list goes on and on. So you can imagine my Pastor and his wife’s surprise when I informed them I wouldn’t be in church the following Sunday because I was attending this retreat. I was even surprised myself.  I was delighted to find out that I was not the only non-Catholic attending that weekend. On the last night we had Adoration. I remember being in the chapel and having an overwhelming sense of peace and belonging, as if this is where I was meant to be, in the presence of the Holy Eucharist. I still wasn’t sure what exactly we were “Adoring” but I felt in my heart that it was something good. Thankfully this past Easter my eyes were opened to the mystery I had been wondering about for years.

During my RCIA process they had a lesson one night dedicated specifically to the Real Presence of Christ in the Eucharist. By this point I had read a few stories about Eucharistic miracles and I was starting to believe they were true but I was searching for Biblical Truth…being raised Pentecostal, a faith based on scripture alone, I was still a little skeptical. I couldn’t grasp the fact that this was the Body and Blood of Jesus that is…until they began reading St. John chapter six.

In St. John 6:48 Jesus says “I am the bread of life.” In verse 51 He states that “Whoever eats this bread will live forever and the bread that I will give is my flesh for the life of the World.” This is a passage that I’ve heard my entire life and I believed, as many others do, that Jesus was only being symbolic. The Priest in class with us began to explain how Jesus normally taught using parables and then He would go back and explain what He had just said…He didn’t do that this time. Instead He let everyone walk away, confused; possibly thinking He was speaking of a type of cannibalism. “How can this man give us [his] flesh to eat? (v. 52) many couldn’t accept this teaching. In verse 66 it is said that “many of [his] disciples returned to their former way of life” after hearing Jesus speak these words.

How grateful I am that I’ve been privileged to be able to learn the truth about was Jesus was saying. That night I left RCIA filled with overwhelming joy. I cried tears of joy for the gift of the Real Presence and that in a few short weeks I was going to be able to receive it at the Easter Vigil. I couldn’t wait until the next time I would have the opportunity to be in front of the Blessed Sacrament. I found out about a local Parish that had an Adoration Chapel.

I went to the Adoration Chapel one afternoon… I was so nervous walking inside. Jesus was in there. I was here to see Him. I was the only one in the Chapel so I had to open the tabernacle. I stood in front of it, trembling. I was there. I felt like my life had been leading up to this moment for so long. The realization that Jesus was there within the monstrance had me in awe. It consumed my entire being. I opened the tabernacle and immediately dropped to my knees in front of Jesus. I was overflowing with love for this moment in time that I was in. All the times I had been in front of the Eucharist and had no idea what was so special about it, flooded my mind. I couldn’t hold back my tears. I never wanted to leave the Chapel. I couldn’t understand why anyone would want too!

I honestly feel that if everyone in the world would realize the Real Presence of Christ in the Eucharist we wouldn’t have so many empty seats at Mass. We get to receive the body and blood that was sacrificed for us 2000 years ago at every Mass! I know to some who have grown up in the Catholic Church the Eucharist is just part of a one hour Mass that you go to out of obligation on a weekly basis or even on a seasonal basis, Christmas and Easter. It’s no longer a “big deal”. Imagine growing up without it. Imagine having communion at a different church and only receiving a cracker and grape juice that symbolize Jesus’ sacrifice, and never knowing the fullness of the Holy Eucharist. After learning the truth of the Real Presence I can’t imagine my life without it.

Don’t fall away from this precious gift. Jesus is there at Mass waiting for you. If you need to, go to Confession, yet another wonderful Sacrament of the Catholic Church, and receive absolution as soon as possible. Don’t go another day with receiving the Eucharist, because there are some in the world who don’t have the opportunity to do so. Some who will never know about it. We are a blessed people to have this opportunity every day. Don’t take it for granted!

Samantha was the 5th Place winner of the Veils by Lily Real Presence Essay Contest.