What More Could Anyone Possibly Want? 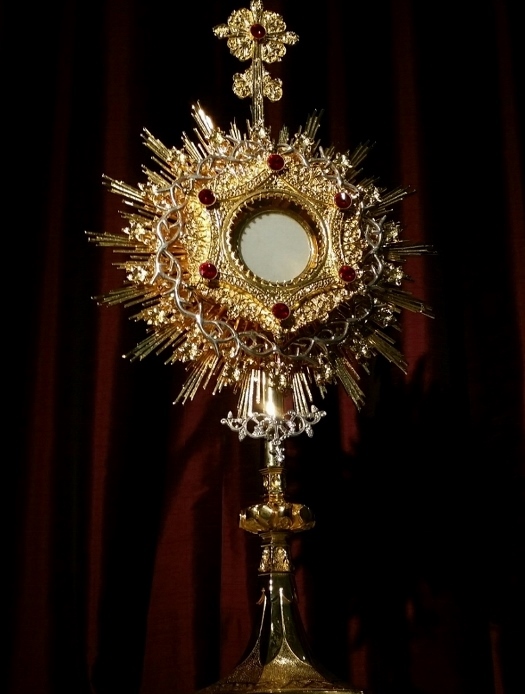 I remained in the dark church after Mass ended, praying silently. From out of the darkness, a woman slowly approached the communion rail. Her steps were painfully slow, assisted by the sturdiness of a cane. Each foot dragged across the cold stone floor, echoing throughout the nearly empty church, as she made her way through the darkness. Summoning every bit of strength, she reached the rail and collapsed on her knees.

As she knelt there, eyes fixed on the tabernacle, a priest emerged from the sacristy. Genuflecting, he approached the altar and selected a small reliquary holding a precious relic. Moving reverently, he came to stand before the woman. He prayed over her for a moment before raising the relic and blessing her with it. He left as swiftly as he had entered.

What happened next I will never forget. Rising from the rail, the woman tucked her cane beneath her arm. Standing straight and tall, she left the church quickly and effortlessly, her steps confident and sure. That moment became for me, and all who witnessed it, a reminder of the great beauty and power of the Catholic Faith. Our Faith is very much alive, because Christ is as present today as He ever was.

It could be easy to forget that Christ is still present in the world today. He suffered, died, and was buried. Although He rose from the dead, He afterwards ascended into Heaven, leaving behind Apostles who were very uncertain of the future. It would seem to be the end of the story. Christ, the leader of the Apostles, was no longer there. His followers could return to their homes and families. Matthew, the tax collector, could return to his position. The sons of Zebedee could return to their father. Those who were fishermen could return to the sea. Yet, they didn’t return home; that wasn’t the end.

The Apostles knew and understood that the end of Christ’s work here on earth was only the beginning of something incredible. Instead of returning to the lives they left behind, they became missionaries, priests, and bishops. One, chosen by Christ, even became pope. They defended, taught, evangelized, traveled, and shared. For this, they were scorned, threatened, persecuted, arrested, and tortured. Finally, after years of spreading the Gospel and carrying it to the ends of the earth, all but one of the Apostles faced a cruel death of crucifixion, beheading, hanging, or stoning.

It wasn’t the end, but the beginning. From the time of Christ’s death to today, many people have followed in the footsteps of the Apostles, causing the world to ask what inspires such love and loyalty. What drives that many people to willingly sacrifice their lives? What causes a crippled woman to painfully fall to her knees before the tabernacle? What keeps the Church strong through every storm, prevailing against the gates of hell unto the end of time?

A miracle in Lanciano, Italy, offers the answer to these questions: it is Christ, present thousands of years ago and still present today. Years ago, in that village, a little circle of what appeared to be bread changed into actual Flesh. The doubting priest, who held that miraculous host in his hands and watched it transform, never again questioned the True Presence of Christ in the Holy Eucharist. Not only did the host miraculously become Flesh in the church that day, but it remains Flesh to this day. Tests and studies have repeatedly proven that the host is indeed true human Flesh and Blood, echoing what the priest declared that day, “Come, brethren, and marvel at our God, so close to us. Behold the Flesh and Blood of our Most Beloved Christ.”

I once heard a man speak about one of the most influential experiences of his life. Decades earlier, while playing outside as a child, he observed an elderly man walking slowly down the sidewalk. As he approached the church, the elderly man stopped before it and removed his hat. He bowed deeply towards the church before straightening and continuing on his way. In this simple act of reverence for Christ’s presence in the tabernacle, the old man showed an understanding of what had been true for thousands of years. He believed the same truth that drove the Apostles to teach and evangelize ceaselessly until their last breaths. Christ, the Incarnate God, is truly present in the world.

The man who shared that story was a priest specifically because of that childhood memory. He remained faithful to his vocation until death, becoming one of the holiest people I have ever met. He is known and remembered for many things, but most remarkably, his demeanor at Mass. The fact that he held Jesus, in the flesh, in his hands at every Mass, overwhelmed him. Moved by wonder and love, he wept openly during every consecration and elevation of the host. Like the Apostles, he firmly believed until the day he died, that there was more than simply bread and wine upon the altar at Mass.

Christ’s humanity allowed Him to walk the earth as a man, but His divinity is what keeps Him present in the Eucharist here on earth. It is from that True Presence that all goodness descends. Constantly uniting souls to Himself in the Eucharist, He is what gives the Church and her people strength to endure all trials and adversity.

As Saint Teresa of Avila once declared, “I cannot doubt at all Your Presence in the Eucharist. You have given me such a lively faith that when I hear others say they wish they had been living when You were on earth, I laugh to myself, for I know that I possess You as truly in the Blessed Sacrament as people did then, and I wonder what more anyone could possibly want.”

May all come to realize, like St. Teresa, the great treasure we have in the Eucharist: Christ who is the living God, yesterday, today, and always.

Samantha was the 8th Place winner of the Veils by Lily Real Presence Essay Contest.