Therese More: I Converted (And I Veil) Because of the Eucharist 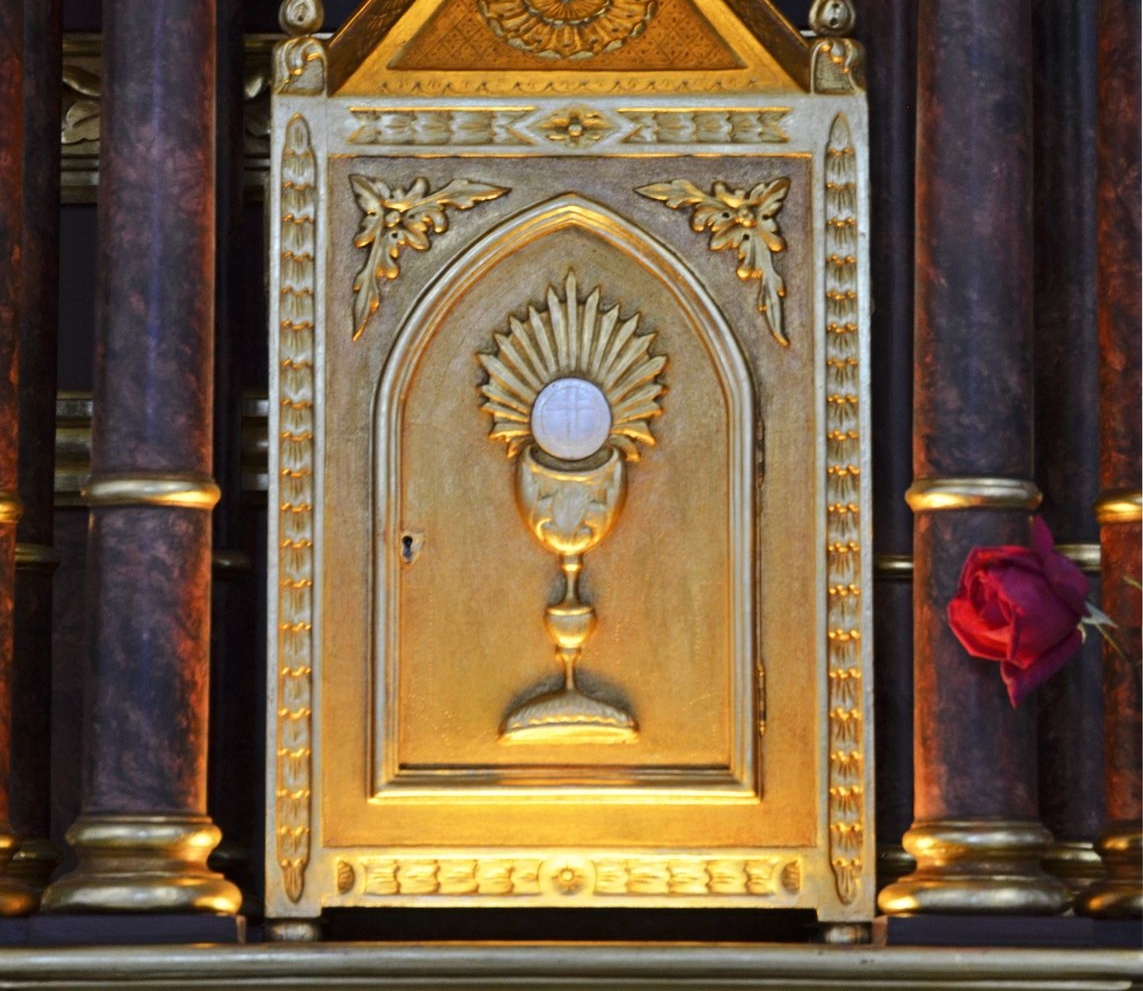 Prayerful, quiet, pure, uninterrupted silence was what I observed the first time I set foot into the chapel at St. Paul’s Newman Center. This was a foreign concept to a Lutheran who was accustomed to quietly talking about life events with whomever was sitting near her in the pew. Over 50 college students were in this chapel and not one of them was talking. In fact, they were kneeling in prayer, focused intently on this mysterious golden box. I wanted to know why they were staring so incredulously at this box, as if they expected a miracle to happen at any moment. Little did I know that one would soon be occurring on the altar of the Lord.

Although I sat with my friend through the entire Mass, I hardly understood what was happening. I had been raised in a devout Lutheran family. We were faithful Christians, but nothing could have prepared me for the whirlwind of questions formulating as I contrasted the practices of our respective faiths. Why do Catholics put their right knee down before they walk into the pew? Was silence before Mass really so necessary or are Catholics just horribly unsocial people? Why all this kneeling? Why do they store “bread” in that mysterious golden box? Why does the server ring those bells? If I’m a good Christian, why can’t I receive “the bread” like everyone else?

My friend didn’t know that when Mass ended he would be bombarded with an assortment of questions. The mysterious golden box was called a tabernacle and it was the place where the Real Presence of Christ resided, and everyone always genuflected before entering the pew out of respect to this great king. The people are silent out of respect for prayer, but mainly out of deference to the King of Kings. The priest is the only person who can perform the transubstantiation of bread into His body & blood and we all kneel in humility at the coming of our Savior. The bells announce this great coming and any additional hosts are stored in the tabernacle so that anyone who visits the church may pray to the Lord in a very special way since He is physically dwelling there.

I found that for every question he answered, I formed at least three of my own. He was very humble and not afraid to admit that he needed to do some research of his own to answer some of my questions. My first true encounter with Catholicism left my head spinning and as a curious and eager-to-learn college student, I wanted to understand this mystery. I learned the Newman Center celebrated Mass daily, so I attended daily. I learned much about philosophy, euthanasia, marriage, abortion, the papacy, the Reformation, Mary, and from the back pew of that Newman Center, my wisdom in the Lord grew.

One day, like every other day, I went to daily Mass, but this day was different as I was the recipient of a beautiful grace. As the priest prayed the words, “This is my body, given up for you. Do this in memory of me,” I had a revelation that if I truly believed these words, if I honestly believed this was Christ, I should join the Catholic Church. Christ had touched my heart at that Mass and the image of the priest holding up Christ at the consecrationwas burned in my mind. From that moment on, I felt uneasy in my Lutheran Church. I had continued attending this Lutheran church every Sunday and I loved my pastor, family, and friends, but it seemed empty somehow. I knew that empty feeling was because they didn’t have a tabernacle. They didn’t genuflect. There were no bells. There was no Real Presence.

I entered the Rite of Christian Initiation for Adults class and began my year long journey of entering the Catholic Church. The more I learned about Christ, the more I yearned to receive Him. It was somewhat like being engaged to my husband and waiting for the consummation of our marriage, but there was a burning sensation in my mouth each time the priest performed the Consecration. Words cannot describe the longing in your heart when you know that Christ is present on the altar at every Mass, but you cannot receive Him until the appointed time. Finally, on April 11th, 2009 at the Easter Vigil, I was confirmed as St. Therese of the Little Flower and received my very first Holy Communion. Joy filled my soul as the Bishop placed His precious body and blood on my tongue and my risen Lord deigned to dwell within me.

From that day forward, I continued to attend daily Mass and received the Lord as often as possible, but the Lord continued to work in his curious daughter, who wondered why the older women at Mass wore those peculiar doilies on their heads. These chapel veils or mantillas were worn by women for many reasons, but the one that stopped me dead in my tracks was that women are considered tabernacles of humanity. I couldn’t stop praying about the beauty of that statement.

I discussed it with my husband and as we researched and learned about the wearing of chapel veils, we were both drawn closer to His Real Presence. We began going to weekly Adoration and I ordered my first veil from Veils by Lily. Although I did fret and worry about what others would think, I quickly dismissed those vain concerns. Christ gave his very life for me and He has moved my heart to know Him so intimately that I should have the privilege of donning a chapel veil as I come into His presence. How could I throw away such a beautiful grace? I pray that all my life I continue to respond to all He asks of me for St. Therese once said, “Holiness consists simply in doing God's will, and being just what God wants us to be.”